Our first day in the saddle–a 70km loop starting and ending at Les Eyzies, where there’s a fine restaurant named after Cro-Magnon man and a hotel with a piscine: 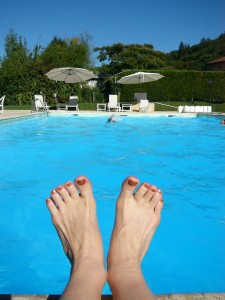 Here’s a little collection of images and video from the ride, which rolled up and down all day through quiet countryside. Of the many crops being grown we saw corn and more corn, sunflowers, grapes (the three treasures?) and tobacco, a fourth treasure in France. It’s amazing to me how many people still smoke in the world outside of Berkeley, California, which is a lot of world!

I think one of the reasons I’m so enamored of riding a bike is the feeling I have of no separation from my surroundings. I breathe the local air, smell the smells, commune with the cows. In a car, on the other hand, it’s easy to feel removed from others, to feel a sense of opposition and distance. I like the speed of the world from a bike. I like hearing the world. I don’t love the late summer heat (and either do my legs, judging from the heat rash), but I accept it, doing its heat thing.

The photo of John thumbs-down at the street sign is leaving a town called “Mouzens.” Those of you schooled in Zen might appreciate the pun…No Zen in the Dordogne?

Tomorrow we pack up and leave Les Elyzies with panniers full–no more loops but a point-to-point ride from this point out. I’ll say more about that in my next post. Thanks for tuning in. If you have friends who might enjoy the blog please send them along for the ride!

May all beings ride bicycles.