Friends Bill Stewart and Kalima Rose arrived in Toulouse on Sept 14. On the 15th, we loaded up the bikes in Toulouse on the very narrow street outside our hotel. A tourist train snaked by, and several cars that I never thought would have fit without taking off a mirror, or a handlebar.

We arrived in Argeles-Gazost, a great place to base ourselves for rides over many well known Tour de France peaks.

Unfortunately, John had developed a nasty cough by then which is still lingering despite a visit to a local doctor and a prescription for antibiotics. Yes, maybe it’s viral, but with John’s myeloma, we don’t take chances. The cough sounds like it is coming from his feet.

He has been chauffeuring us to the starts of our rides, allowing us to do more manageable distances and getting out to see the views outside the hotel room. 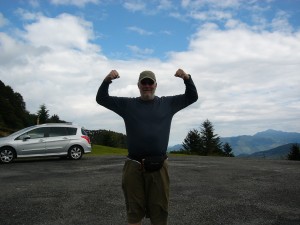 He is trying to keep a beneficial attitude, but we are here on this Pyrenees trip because he dreamed it up. We are riding, and he is hacking and lying in bed with muscle aches. I was sick like this on a bike trip we did once in Italy–also preceded by rainy weather–and it was only so consoling that we were staying in a castle and surrounded by Tuscan hills. He is with us in spirit, I know, but I miss him on the rides. We’ve been married twelve years and riding together steadily all that time, so his absence on these mountain passes is profound for me, down to my toes.

That said, I can’t really imagine riding anywhere more beautiful. The Tour de France riders can hardly take it in, they are in so much pain and so focused on their competitive goals. But I’m not competing with anyone, and it’s lovely. The first ride in our Pyrenees tour started at the top of the Col de Spandelles. Here we are with all of our clothes on, preparing to descend.

Here are the views from that descent. Imagine mountain stream sounds in your ears, the dinging of sheep and cow bells.

Then we rode up the Col du Soulor (altitude 1474 meters). The feeling is so expansive you are swept up the mountain by it, pedal turn by pedal turn.

Ride 2 in the Pyrenees was yesterday, the 17th, from a little town called Gédre, steadily climbing up a long valley to the Cirque de Troumouse, where I was astonished to find cows at that elevation, 2125 meters.

What will we do today? That remains to be worked out, but I am sure it will be spectacular!