For years I’ve been watching the supreme athletes of the Tour de France pedal up the passes in the Pyrenees–and been awestruck by the scenery that surrounds them. Tomorrow, I’m heading to France with my bike (and my husband) to cycle up some of those same summits. I won’t be racing, but rather, basking in the natural wisdom of mountains, the pleasurable grit of a challenge, and the daily succor of French food and wine. I’ll be discovering a part of France I’ve never been to before. I’m not sure what I’ll be moved to write about yet, but I’ve been thinking that if bicycles had existed in Buddha’s time, Buddha definitely would have been a wheelman. I’ve also been reading a lot about cycling history, especially as it relates to women’s liberation. Here’s an inspiring photo that speaks to that theme: 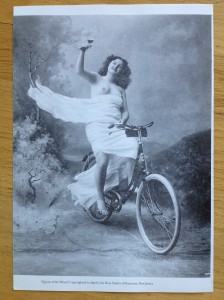 Stay tuned. We’ll be warming up in the Dordogne, between the Loire Valley and the Pyrenees. I’ll write next from our staging ground in Toulouse.