I woke at 4 a.m. this morning, jet-lagged and hungry, and remembered in a wakeful fog that today is my birthday. Forty four! Perhaps appropriately, we head to Les Ezyies, where there is a Museum of Pre-History. I love the notion of a time before history. In my 44 years, my own personal pre-history, that would be before my parents met, or even before either of them learned to ride a bicycle. There’s something encouraging about pointing towards a place on one’s birthday that is rich with archeological finds from the Paleolithic period–some 10,000 to 200,000 years old. Makes 44 years seem like nothing to get too excited about.

In the late 19th century, during the first bicycle boom, at the age of 53, Francis Willard learned to ride a bicycle. “There’s more taught by the bike than meets the eye & ear,” wrote the leader of the Women’s Christian Temperance Union. Willard looks a little brittle in this pic of one of her early rides, before she’d mastered balance: 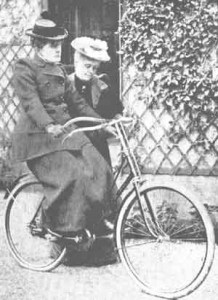 But her writings about learning to ride are far from tight. “I began to feel that myself plus the bicycle equaled myself plus the world, upon whose spinning-wheel we must all learn to ride.” May we all be so inspired as to never become brittle of mind, considering ourselves too old to take up something completely new and challenging, as the bicycle was in Willard’s day.